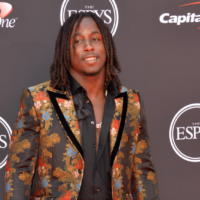 Cleveland Browns coach Kevin Stefanski said Monday that running back Kareem Hunt will miss at least one month due to a calf injury hw sustained during the Browns’ Week 6 loss to the Arizona Cardinals. Hunt injured his right calf in the fourth quarter of the Browns’ 37-14 setback Sunday in Cleveland. He was taken by cart to the locker room and did not return.

tefanski told reporters Monday, when asked about Hunt’s timeline to return: “We will work through all of it, but it’s going to be more than three games [missed].” Hunt started Sunday because starter Nick Chubb was ruled out with a calf injury. Chubb leads the Browns with 523 rushing yards and scored four times through five starts this season. Hunt totaled 522 yards from scrimmage and five scores in his six appearances to start the season.